As anyone would say when traveling; the first day back you’re just exhausted. I feel like my head has been in a steam room most of the day.

Somewhere in New Hampshire…or Vermont? I hadn’t yet realized how far off I was…

When I landed at KCI I was greeted by my girlfriend and four news stations. Because the plane had over 30 local runners participating in the Boston Marathon everyone was looking for a quote. Unfortunately my wardrobe that I had picked out that morning was the same color scheme as the jackets from those in the marathon. After getting through the gate, I hugged my girlfriend, answered a few questions [clarifying clearly that I wasn’t there] and moved out of the airport promptly. While this was going on the airline computer system for American Airlines had gone down as well, redirecting passengers to the same terminal we were in.

For once KCI was an absolute nightmare.

After an hour of running around we were finally out of the airport, I picked up my repaired Altima, worked on a store in Kansas City, and met some of the crew at Freebirds down south. Upon returning home that night up until this point everything has just been a whirlwind.

Turns out on US 302 that the hairpins are driven so much that the line int he middle of the road…yeah…not visible. That railing on the right keeps you from falling into the frigid river below. Fun times!

But, we move on. As goes with any trip I’ve got photos throughout this post from Monday’s random journey, and all sorts of random links that document the entire, eventful journey to Boston, Massachusetts [and back]: 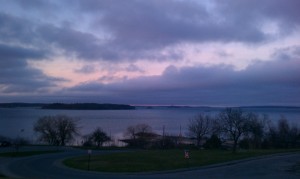 Turns out coffee shops in Portland, Maine close at 7:00 PM EST during the week. Who knew? The good news though? The ocean never closes.

Sadly, this journey will be memorable for far too many things. It was nice going into work today and being asked about the soccer match. Realistically, by the time I woke up today if it wasn’t the phone case I purchased this weekend, I’d almost forgotten why I was even in Boston. My poor girlfriend doesn’t even talk about the game, she only makes mention of me flying back. MC talked to me today on the phone, and just hinted at how nervous my girlfriend was about the airport [which thankfully was wonderfully amazing]. It’s a heavy heart that I left in Boston, to the city, but not the people. The people of Boston do not need heavy hearts sent their way; they’re stronger then that. Take every horror story you’ve heard about New York, Washington, and elsewhere along the coastline and never, ever compare it to the city of Boston, Massachusetts.

Even before the traumatic events on Monday, I was going to be sure to wrap up this whole adventure by speaking about the city dynamics, the atmosphere, and the overall culture of Boston; just from my perspective. I feel guilty knowing now what I do versus what I had grown up believing about “Bean Town”. The people are prideful, but not in an arrogant way, its in a way that shows you that they’ve worked hard for what they have. Meeting the Boston PD while at Dunkin Donuts was an example of that; everywhere I went the respect for the police in Boston was unreal [this was before the bombings mind you]. Sure, traffic is terrible, but people aren’t mean, they don’t yell at you; this was definitely not D.C. or LA for sure. It really felt like a close knit community of only 1.2 million people. Outside of the insane pricing for home ownership I definitely wouldn’t mind living in Boston [or Portland…my goodness].

In case anyone is ever curious…yes, I did finally get my lobster roll at Susan’s Fish-N-Chips in Portland, Maine [also got their 2 Fish Sandwiches for $2.50]…

Portland, Maine; while being much smaller then Boston is truly a hidden gem in the New England area. If you don’t know what you’re looking for you will miss Portland, I promise you. However, once you find it, even a few minutes in there will keep you from wanting to return from your original destination. The city overlooks a glass bay, from one side you find people and parks, and everything in between and on the other side you see the cityscape; nothing extremely large, but its beautiful. Modern decor blends with fishing stories and great food. The people are lively, active and engaging. I saw more people in bikes in Portland in one evening then I’ve counted back home in at least a month. It’s peaceful, remote, but large enough to find anything and everything you’d need [did I mention that they have a pretty decent lobster roll?]