I told myself that I’d never do anything to any cheesy effects of Jack Johnson, John Mayer, or Train…

I went two for three.

I find it fascinating that this time last year I was wrapping up the first volume of FilingThePapers; the section well known as “X“. The primary focal point about the immediate recovery of divorce and moving on in my own life. With the adventure of Guatemala really making its mark of a year from the divorce; I started over with volume two, labeled “O” [Get it yet? X’s and O’s?…hehe…]. The second volume really emphasized growth, it wasn’t aimed so much at reflection as much as it was moving forward; most notably the theme tended to unintentionally revolve around the creation of the Kansas City Shock and seeing God’s hand do marvelous, inexpiable things with the program, including the kick-off of this sports team just a few weeks ago. I never really thought about where “O” would end. With “X” I had a game plan, a blue print, an idea of how to wrap it up. How do wrap the continuation of ones life? I think my girlfriend answered it without realizing it.

It’s been a crazy, crazy week. On Monday, after ten years of service, I stepped away from Subway for good. It wasn’t planned to be this prompt, but it was coming. There were several factors adding to the eventual moment that took place on Monday, some on my end some on my employers end. Insanely “Mobile Minutes: Equipment Check” really was a key for me. I went into Monday’s meeting knowing that there was a strong likelihood I’d leave without being employed with Subway. Because of that it really didn’t hurt when the truth came out of what was taking place. Now, in this process I did lose the company car and the ultrabook [laptop] because they were company property. I’ve been adjusting, but am already looking for own ultrabook because I like my eight year old laptop…but it is just that…eight years old. Thankfully, God has blessed me with a truck that won’t die. Seriously. It was over 268,000 miles on it and I witnessed my family [MC primarily] put each one of those miles on the truck. It’s been good to me, and in the worse case scenario, it gives me transportation. Now, if I need to go down south, to the city, or a business trip I’m further blessed with my girlfriends car in those instances until something else gets figured out. Unlike being jobless a few years ago, I do have money to get me through comfortably the next 90 days while I work on additional employment. I really, really wish there was a way for the Kansas City Shock to be my full time job, but currently it’s a new business and because of that, the money isn’t there yet. That’s alright, because also unlike last time, I know God has my back and He has something incredible in store for me. Some applications I’ve put in I’ve already started to hear back from [whether that employer knows it or not]. I will confess that I’m strongly aiming at the soccer market. Because of the Kansas City Shock, my calling, ministry, and life…that’s where I know I need to be. Now, we’ll just see how God wants to plan it out. It was kind of sad to see my supervisor off from Subway, she’s a God fearing woman who has known me most of those ten years. However, outside of her and a few others, there wasn’t much of a connection with that company so stepping away wasn’t too hard. As I explained to MC over lunch on Monday, Subway did exactly what it was supposed to do. It moved me from Point A [divorced, alone, stuck down south] to Point B [the city, a family, and a new life]. When you see what God has done with a job, and how short life is compared to eternity, it doesn’t sting as much [aside from the car being gone]. The staff with the Kansas City Shock knows that I’m gone from Subway, but I’m very, very fortunate that my earnings from Subway were not the direct ‘lifeline’ of finances for the Shock. This assists in knowing that, that program isn’t negatively affected by this transition and it continues to move smoothly.

Obviously in this process my girlfriend was caught off guard with me leaving the company. She’s working her tail off at Starbucks trying to move up the career ladder [and kicking butt in that process mind you], so it stemmed all sorts of questions of immediate panic that have calmed down. While many people didn’t know the exact circumstances with my job, she was aware, so while there was some direct panic; it wasn’t overly shocking. However, even Monday night I did find myself questioning what was going on with life and what to do next [I hadn’t started the resume/application process yet]. My girlfriend, knowing me so well, started sending me links to YouTube videos of hedgehogs [she wants one desperately], and then a random video of the song “Banana Pancakes” by Jack Johnson. Turns out, her not being a yuppy, she’d missed that song a few years ago. It was cute, light, and loving. It only makes sense that come Tuesday morning I wound up eating banana pancakes at the apartment with her [she made foster too…and it was excellent], and we started to talk about what our next move should be [several times over we’ve made the comments that it is us vs the world, the beginning of week helped solidify that]. I think really this is where the true insanity of the week started. The conversation, while not 100% accurate, went something like this:

D: So, now what?
Girlfriend: I don’t know, what do you think?
D: Not sure. Want to get engaged?
Girlfriend: Really?
D: Sure. Why not?
Girlfriend: I wonder if Kay’s has that ring I like in stock.
D: We could grab it today. Let’s go look.
Girlfriend: Let me call first.
[calls four different locations in the area]
Girlfriend: They don’t have it in stock, and it would require at least three days to get here.
D: Want to go see if there is one that you may love more that’s in stock?
Girlfriend: Are we seriously doing this?
D: Absolutely
Girlfriend: Alright. Let’s go!

Now, I’m not going to say that conversation is extremely accurate, but that was the overall gist of the moment. We got in her car and drove to the local mall and walked into Kay’s. Then the fun began. She started looking at rings, and of course the ladies at Kay were top-notch [as always], and then ‘it happened’. You know, she saw that ring and that was going to be the ring. No matter what. She sat there in Kay’s holding this ring, and just paused for a while thinking on whether or not this moment was really happening. It didn’t take that long before I heard, “We’ll take it!”

At the register, processing the paperwork, the lady asked if I would like to put the ring on her in the store. Naturally, I declined the offer and just had it boxed up and placed in the sack. Incredible, through all these ‘reckless’ moves, I did have a plan.

When I was little there was a spot next to the Missouri River that I loved going to. No docks, no houses, nothing, out in the country right next to the giant body of water [I even had senior pictures taken there]. It was my secret spot, even at the age of 25 I rarely took anyone to that location. It was a place, in Kansas, that meant the world to me and I could escape everything. In my girlfriends case she has a undying love of rivers and bodies of water; reasons of which I’ll never understand.

It only makes sense that we took a short five miles jog across the river to this secret spot. There was no candles, no cameras, in fact I was in running clothes and she was in mismatched work/comfort clothes. Honestly, we were a humorous mess that anyone could tell that the day before took an unknown toll on each of us. In that mess and near the body of water that both of us relate to so well, I got down on one knee and just asked her to marry me [not as easy as it sounds, because understand this…those who never have…you will get nervous]. Insanely the ring didn’t need to be resized at all and it was a perfect fit. Afterwards, we went and worked out [true story] and then surprised my mother at her house. Somewhere in the mix of this Facebook went nuts with a photo and congratulations galore [thank you all!], and we just entertainingly laughed the night away because we did something unpredictable. I can safely say at least 99% of the people who know us would not have seen that one coming, and that’s fine with both of us because through this whole crazy process we made sure that we were doing something that we orchestrated not dictated by anyone else. That is more liberating then even walking away from a job.

For those of you who’ve just now discovered this page you should do some digging, and see what this was all about. For those of you who have been with me since day 1, thank you for the support, prayers, and for humoring me on my careless adventures. 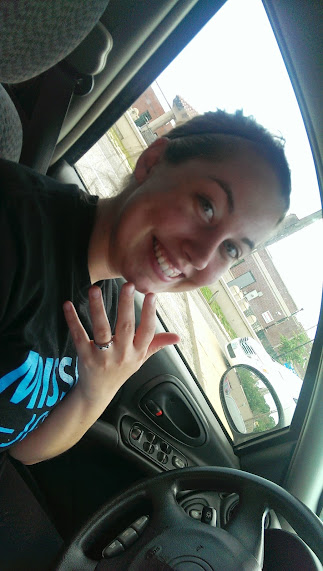 That is one happy chica!

FilingThePapers isn’t going anywhere, I’m definitely not ending the site [it’s far too fun], and I’m already knee deep in the first draft of “X: Dare To Be Different”.

Let’s see what comes next!

Note: If anyone ever got confused, I would like to clarify that my girlfriend is indeed the same person that is referred to as Darco throughout these posts. What’s even more incredible is I’m marrying the same girl that I had the honor of leading to Christ one night in the parking lot of Starbucks.