There are two phrases that I grew to hate as an adolescent:

Are you going to be a preacher someday?

My selfish ego revolves around not doing what people expect me to do, and constantly rebelling against the expectations of those around me. There’s nothing Biblical about this principle, but 27 years into this life I think I have enough research to support to theory of my own behaviorisms.

To this day I still make a solid stance in never having a desire to speak from a pulpit. There’s nothing in my heart that desires it, and after several years of being on a lot of different paths with my relationship with Christ I can affirm that, that is not a position for me.

With that said, the second group I must apologize to, raise my sword by two hands and lay it at your feet in the form of a surrender. Truly, I was designed to be a teacher.

At 4:35 AM this morning Darco woke me up with a phone call (she was opening her store), and informed me that due to the amount of snow piled up on one of our vehicles she would be taking mine to her work. This meant that I would be getting up thirty minutes early to scrape off seven inches of crusty, frozen snow from her car. Needless to say my blood pressure kept me awake for the rest of the morning. During the time laying in bed I started to think of a strange memory that I’ve held onto for years. There was a time that I had a head cold and still decided to go into a school to substitute teach for the day. I had my hot tea in my mug with honey and lemon, a pair of khakis, and a purple button up shirt. Waking up I felt miserable, but once I stepped into the building it was just like a spark had lit within me. I felt alive even with that pesky head cold. I remember leaving that school, along with several others, each afternoon sad that I didn’t have meetings, after school activities, or anything else to do after the bell rang. The reality was that I really didn’t like being a substitute teacher, I desired to be more. Internally, even through years of denial, I wanted to be a teacher.

That’s what being awake at 4:30 in the morning will do to you; bring up random memories of times that once were.

Interestingly enough, I remember that, that day I had snapped a photo of myself (before selfies were cool) with my webcam at school. I did this as part of a weight loss journey I did in 2011. That head cold, cup of tea, and random memory took place the same day as today; February 2. So, only because it makes sense, I decided to take another picture today and compare the memories of the two moments leading to the moment that I’m at right now. 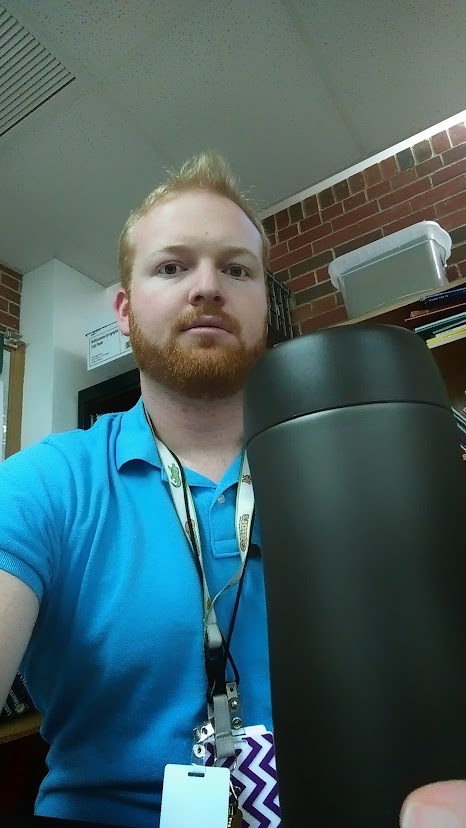 Upgraded the tea cup…(it really is tea, and this is me getting over a head cold)

Aside from the comments about the beard, hair, and cup upgrades there isn’t necessarily a ton of difference upon first glance in a four year stint. However, I’m not a substitute anymore, and I’ve had my adventures outside of the world of academia. I’ve come back permanently because I truly adore being in the classroom. It’s addicting to interact with students, and to work below instructors who are motivated by knowledge and growth. I dream of having my own classroom only because I’m finally having fun. I finally am working somewhere where I’m having fun, I don’t know what tomorrow holds, and from what I’ve gathered…I’m actually kind of good at it. Not only do things just come easy, such as communication, but I’m simply motivated by the success of the student. When a test score goal is reached I’ve been known to run into the principal’s office with the test to show what’s going on with excitement. I can’t hang out in the 6th grade hallway because of just being a distraction to the students, and that’s a great problem to have in my book. I get to be at school after hours to work on projects with students or just to chat. I’ve been told to leave on several occasions by well-meaning instructors, but I just can’t. Everything clicks when I’m in the building. The words flow, the actions make sense, and the results follow.

It’s an undeniable claim to God’s glory, He was going to get me to teach inside of a school one way or another. I had no idea it’d be a massive school district in a massive city, and I had no idea the diversity that I’d be working with on a daily basis. I would have never imagined a day where I would struggle pronouncing names or understanding culture displays. I love it though, I love the fact that I still get to learn alongside these unique creatures on a daily basis. Sometimes it’s hard to place into words what goes on, on a daily basis in the world that I live and work in.

I suppose that’s why I’m typing this, I’ve finally headed home. I’ve finally listened to the still, small voice and found my comfort zone. I’m a teacher, that’s just something that I have to accept.