In case you’re interested in the week of a teacher…

All sorts of weird stuff, but all of this activity makes me grateful to be busy in a blossoming school.

The human body naturally picks the worst times to get sick.
I’m fighting some stupid chest cold that’s knocked me out for two days now.
Darco is cleaning like crazy, and I’m too dizzy to figure out reality (slight fever). I have a production tomorrow with Mazda at an area high school, and an open house for our business office on Thursday. Meaning…today is the only day I can be sick, and I have to be better before tomorrow.
Ugh…

Between Darco being sick this week, and her opening the store several times this week she’s been a hard one to locate.
Add that to the excessively late night work periods and meetings that I’ve had this week, and incredibly we’ve actually rarely have seen one another since last weekend. I know that both of us are trying very hard at life, balancing work, family, and rest [struggling with each], and it’s easy to see how American’s get so caught up in the busyness to loose sight on the life that really matters. END_OF_DOCUMENT_TOKEN_TO_BE_REPLACED

Sadly, this is the last day of Darco and I just hanging around the apartment. We’re both ensuring that work goes back into stride starting tomorrow morning. However, we do have a few surprises coming this evening. A couch, a love seat, and a end table are heading our way around 5:00. So, we’ve been cleaning, rearranging, and preparing for that all throughout the day. One of the few minutes I’ve had to hop on here and say a few words.

Married life is great, definitely enjoying it, and one day this apartment will look normal again…one day…

Church (late thanks to Dunkin Donuts), lunch, work (end of the month), back to church by six. Heart broken that I’m missing Peeps Soccer in the process.

At the same time; I had three different companies that we’d been speaking to about the Kansas City Shock turn us down; in less then an hour period.

Now, it is easy to look at that problem with a frown, kick the dust and just be ticked. However, these are the moments that I’m most grateful for the path of my life.

96 applications. That’s the number that’ll echo in my head for the rest of my life. That was 96 school districts that told me I wasn’t going to be the proper teaching material because I was too young, lacked experience, or worse…didn’t coach football. Three interviews; all of them failed miserably [one of which I learned that if I would have taken that job would have risked my life literally with that position…it was at Joplin High School].

It was the small town of 215, with a senior class of 14 that came up and asked for my signature. Out of all those papers, it took that to set me down the path to teach [which ironically never happened anyways].

So, I’m going to give some thanks tonight. As hard as it is; three rejections? Been there. Done that. Guess what?

I looked at my week on Saturday and saw that for the most part I would be home directly from work each night this week; save one.

That got tossed into the wind.

Starting Sunday it has been a non-stop whirlwind. Sunday morning was an epic, spiritual disaster [at least on my part]; I witnessed my home church scramble together during a business meeting; condemn the preacher they hired, condemned each other, made the pastor’s wife cry, and eventually I spoke for six minutes; none of which was kind and stepped out of that building.

I will never go back.

Since I started attending the church that I traditionally do for the past year and few months I strayed away from the ‘become a member’ notion. I mean, how important is it really to have your name added to a book [there is a spiritual joke laced in there]? I kept making the excuse that I kept my membership at my old church because I still had a ‘vote’ there in the event of importance choices. I’m out of excuses after going to an episode of Murray and watching a business meeting break out. This Sunday I’ll be presenting myself before the MoVal body and state that I’d like to become a member of their family. Truthfully, when I stepped out of the church on Sunday, the only thing I could think was, “I wish I was at MoVal; I’d be safe…” I contacted a member on my way back to my apartment, just to talk. It’s just naturally because of the safety and security that I’ve witnessed. However, it doesn’t ignore the fact that Sunday morning and the meeting was really rough, and took a serious toll on me. I pouted the afternoon away, cried a bit to my girlfriend, and was convinced that MC and Jim would never speak to me again [my words in the meeting were very harsh, and in times past would be seen as reckless and unruly].

Monday brought upon new challenges. You know the feeling of being a ‘zombie’ all day; when you just can’t wake up? Yes, that was my Monday. Practically worthless for most of the day; save a couple e-mails. However, that evening I found myself at a Google+ hangout linked up with Casa De Mi Padre in Guatemala. With a few members of MoVal we were able to watch all of the kids open their Christmas gifts that were sent down the US. It was awesome to be so far away, and at the same time so close. Along with that night, I also finished up the outline for the washer and dryer that someone was kind enough to give to me [I also scored a table with three leafs and six chairs from a friend on Friday]. I’ll be getting all of that this Saturday [which of course are several miles apart from each other, and a store stands between them], which knocks out my Saturday.

Today was work in downtown Kansas City, moving between the buildings; freezing cold, constantly spilling my coffee [seriously, Dunkin Donuts fails on lid construction] on my hand. I got home, my girlfriend is over at a sleepover for the night, finished laundry for hopefully the last time at a laundromat. I’ve had a web meeting via Twitter about women’s soccer in the United States, fascinating and confusing at the same time. We’ll work on it. In the process I had some major breakthroughs with the Shock, ones that I couldn’t even dream up. Very, very cool connections. I am blessed to be surrounded by just awesome people.

Tomorrow is work, then Darco and I are heading to Optima Worldwide’s open house. Optima is a SEO tech company in Overland Park, Kansas. We met one of their members at a tech conference a few weeks ago. Because the business concept behind the Kansas City Shock is designated on unity and local business; it’s imperative that the owner is at functions across the city that flaunts and grows the Kansas City technology name. There are other reasons, but that’s all “hush, hush” for now. That’ll place us back at the apartment pretty late.

Thursday I have to be done with work by noon because I’m meeting a college coach for lunch, and directly after that I have a very, VERY exciting meeting during the afternoon. It’s a mysterious meeting, but judging by the first interaction I had; God is getting ready to blow me away…again. That’ll keep me pumped for most of that night.

Now, on Friday I will be attending something called “Venture Friday“; a hangout for young business owners in the Kansas City area. One area that I haven’t developed and utilized very well is embracing the fact that I am a young entrepreneur. I am the youngest women’s soccer team owner in the United States [at this division of play at least], and I didn’t even realize that until a few days ago while talking to some media. Kansas City has recently been named one of the best cities for young investors and business owners; creativity is desired and wanted, and it turns out that through the adventures of my life; I fit this description, I fit the new mold of this historic city. I think it is crucial to utilize that in a business savvy way by forming closer connections to people my age in the same city that may be in similar [probably not the same] circumstances.

I’ll leave you with this photo tonight, it’s of the ribbon cutting of a business that got started right when the Shock was being dreamed up, and they’ve stuck with us through the whole thing. Thursday’s meeting? Directly due to myself, Darco, and our general manager being there and introducing our company. 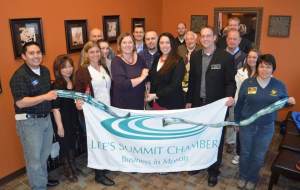 You know those weeks where you just feel it in your bones? When you know God is just going to jaw-drop you with His glory?

It’s that kind of week.